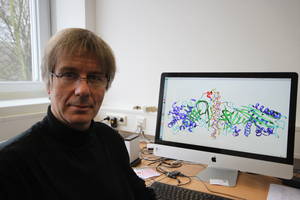 Ulrich Baumann studied Chemistry at Freiburg University, where he researched keto-enol radical reactions, receiving his Diploma under the supervision of Michael Schmittel and Christoph Rüchardt.  In 1988 he moved to the Max Planck Institute, Martinsried, as a Kekulé Fellow (Fonds of the Chemical Industry, FCI) where he did his PhD on the structure-function relationships of proteases and serpins with Robert Huber. From 1992 to 1993 he worked at Stanford University with David B. McKay on serralysin metalloproteases as a BASF fellow. He then returned to Martinsried as a Boehringer Mannheim postdoctoral fellow to study thrombin inhibitors with Richard A. Engh and Rainer Rudolph from 1993 to 1994. In 1994, he received a Liebig fellowship from the FCI and spent two years at Freiburg University before becoming a group leader and Senior Lecturer at the Institute of Cancer Research in London (UK). In 1998 he accepted a Full Professorship in Biochemistry at Bern University (Switzerland), where he stayed until 2009. Since then he has been Professor of Biochemistry and Structural Biology at Cologne University.

Ulrich Baumann’s research interests include various aspects of protein structure-function relationships, as revealed by X-ray crystallography, with particular focus on proteolytic enzymes, their inhibitors, and translation initiation factors. He has recently received further offers for full professorships at the Universities of Tübingen (2001) and Auckland, New Zealand (2011). He is a member of the Swiss Light Source Proposal Review Committee.